As a lifelong student of human biology and physiology, Dr. Gollub’s passion has been to view healing dis-ease with a larger integrated lens.  He has “walked the walk” in both his personal  and professional life using natural approaches to well-being and healing.  He has been an avid runner and lover of the outdoors his entire adult life which has often been his best “medicine” to maintaining good health.

Most important, Dr. Gollub believes that caring human relationships are a key component to well being. He and his staff have continuously strived to create this space in his practice. He sees his job as part teacher, part cheerleader, and part healer and is passionate about problem solving in all facets of life.  The combination of these traits, with long-term patient relationships, makes his approach to the practice of medicine unique. Dr. Gollub offers patients an accessible, caring and trusted comprehensive generalist physician who knows them well. 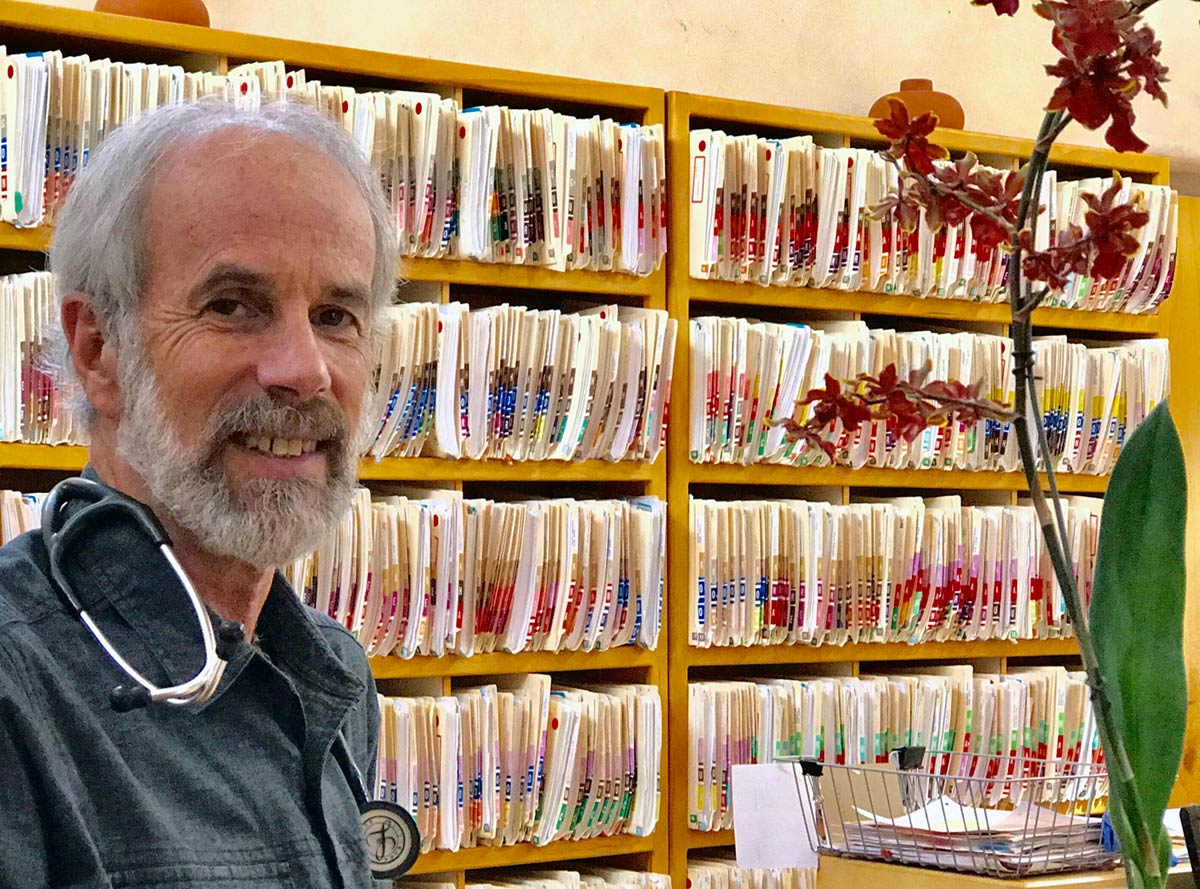 Dr. Gollub grew up the youngest of four children in St Louis. His grandfather ran a small family owned department store, and as a young boy, he was impressed with his grandfather’s ability to connect with his customers and quality service. This humble beginning fostered his drive to nurture personal connections  in his personal and professional lives as a key to well being through his entire life.

Drawn to the magnificent Rocky Mountains, Dr. Gollub received his B.A. in Molecular Biology Phi Beta Kappa from the University of Colorado in 1975.  He returned to Missouri to attend the University of  Missouri Columbia School of Medicine, completing his degree in 1979.

As a fourth year medical student, Dr. Gollub had the privilege of working in a small clinic/hospital on the Hoopa Indian reservation in northern California with 2 family physicians.  This experience cemented his calling to practice family medicine where he could develop a broad range of medical skills including obstetrics.

Dr. Gollub moved to Albuquerque to complete his residency program in Family Medicine at the University of New Mexico.  During this time he also worked in rural emergency rooms gaining valuable experience that broadened his skill base.   He became board certified in Family Medicine in 1983.  He worked for two years in the Presbyterian and Anna Kaseman Emergency rooms subsequent to completion of his residency.

Although these years in the emergency room were very rewarding and stimulating, the lack of continuity of care with these patients in this setting reminded Dr. Gollub of his desire to have long term relationships with his patients.  In 1984, he opened a private practice (Gila Family Care) in Silver City, NM.  When his family relocated to Santa Fe, NM, he worked  for Lovelace Health Systems  for five years before opening his private practice.

What Our Patients Say

I came to Dr. Gollub for a scalpel free vasectomy. It might be obvious that I wasn’t looking forward to this appointment. I did a bit of research and was referred to Dr. Gollub by a friend, so I setup the appointment. Each appointment was quick and painless. The vasectomy itself took about thirty minutes. The days following the procedure I was able to continue work and continue life as normal. In fact, I never had to take any sort of pain medication. I would highly recommend Dr. Gollub. I am thankful I had a good recommendation from a friend, and I’m happy to recommend Dr. Gollub as well.
Scott C.